One can not boast of having been to a great destination in Australia, without traversing the Great Ocean Road.  375 Km long, a trip on this road will reveal to you a whole lot of shipwreck stories, natural sites, and rich culture.

If you are active and adventurous enough, you can also look forward to legendary hiking and biking trails, surfing, and astounding sceneries, filled with native wildlife.  You can use one full day to pass through all the places on this adventure, but for an even more satiating experience, you can do it slowly over several days.  Taking your time is highly recommended!

The ultimate option for transport, is to hire a campervan, it will be very easy to stop as you please en route, to enjoy the view and take as much time as you wish.  There are numerous places on the Great Ocean Road that can give an overwhelmingly wonderful experience, but this itinerary will focus on the road trip between London Bridge and Melbourne. 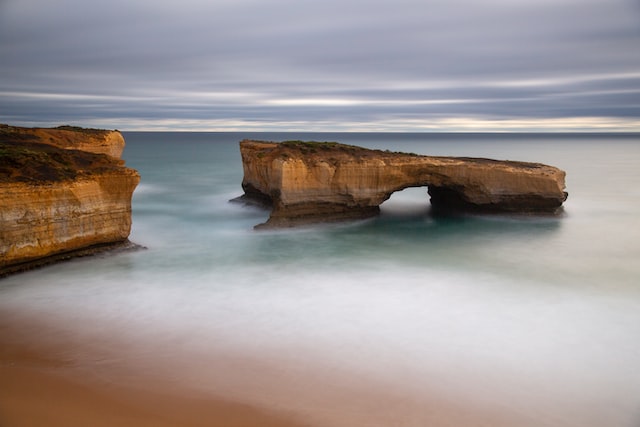 London Bridge which is also referred to as the London arch is not just an exquisite site; it also has an interesting story.

This is a good place to start the day because sunrises and sunsets are magnificent here.  It is perfect lighting for those who take time to absorb the natural features they see.  The great story about the bridge is that before the 90s, it was just a normal bridge between the Arch and the mainland.  On 15th January 1990, however, the bridge collapsed, leaving huge debris of it isolated in the ocean and two unfortunate tourists stranded.  The two stayed desperate for hours before finally being rescued by a helicopter.  There are rumors about the couple’s s illegitimate affairs, but that is the mystery that the place still holds to date.  No one really knows if it was true.

What makes this site worth your time is, in fact, the collapse.  It changed the structure of the coast, and due to continuous erosion, the region is a wonder to marvel at.

After this destination, the next big stop should be Loch Ard Gorge.  From London Bridge, it takes approximately 17 minutes on the road.

Loch Ard Gorge is arguably the best of the destinations you must stopover at.  With the most scenic scenery, this place has beautiful sandy beaches nuzzled among cliffs.  With these well-protected beaches and calming waves, the place is always swamped with tourists during the daytime.  Apart from the sandy beaches, there are natural rock formations, clear blue waters, and bleak bays, which also add to the whole experience.

It is soothing to absorb everything here.  After enjoying the Lorch Ard Gorge, the adventure should move on to Twelve Apostles.  The distance between these two destinations is about 4.1 km.  It takes approximately five minutes to drive to get there

The Twelve Apostles are breathtaking magnificent rock stacks in the Southern Ocean on the Victorian coastline.  The historical explanation for the twelve Apostles is fascinating.  The whole thing is a result of the massive erosion of the mainland.  It is believed that the process began millions of years ago due to gradual tearing and wearing by the winds and waves.  Because of such activity, there was slow but significant chipping away on the cliffs making caves in them and later inevitably leading to a collapse.  It was what remained standing after the collapse that was named Twelve Apostles.  The Twelve Apostles, which are basically huge rock starks of limestone, have spectacular heights of about 45 metres tall.  With their brilliant sandy yellow color during the day and dark foreboding shadows during the night, you can never grow tired of soaking in this breathtaking scenery.

When you have had enough and decide to leave this place, get to Otway National Park, which is a bit far compared to the other destination’s proximity but definitely worth your while.  It is approximately 58 minutes’ drive and 61.8 km away.

A road trip can never be complete without a visit to a national park or reserve.  The Otway National Park, which preserves the Aboriginal culture and maintains the much-required connection with the land’s traditions, making it a must-go-to destination.  It Spans over the hinterland all the way from Torquay to Otway.  The place is very suitable for an unforgettable outdoor experience.  Due to the massive area the park covers, it is suitable for hikes, walks, and even camping.  It houses a significant number of Koalas, birds, seals, kangaroos, and echidnas, among other animals.  With such a huge collection and variety of wildlife, it’s difficult to pass without trying to be part of the experience.

After spending much-needed time here, you can set off for the next stop, the Memorial Arch.  Memorial Arch is 70.6 km away and would take about 1 hour and 19 minutes to get to. The Memorial Arch is more of a historical site that can very well commemorate the whole road trip experience.  The Arch in this place was set up in honor of the 3 000 soldiers who built the Great Ocean Road during World War I.  It was not an easy job as they began construction in 1919 and completed it in 1932.  Apart from the Arch, there is a sculpture of two soldiers commissioned on the road’s 75th anniversary.  The Arch itself has been rebuilt several times since its enactment in 1939 due to a bushfire accident in different time periods.  The government even considered taking it down due to road safety measures.  But even with all these historical hardships, the wooden Arch with stone and cement supports still stands tall.

This stopover wouldn’t take much time.  When done enjoying the view, the journey must then proceed to Melbourne.  From here to Melbourne, there is a distance of 129 km, which would take approximately 1 hour and 46 minutes.

Apart from being the capital and largest city in Australia, Melbourne has some attraction sites worth visiting and events worth participating in. in this city, one can visit the royal botanic gardens, national gallery of Victoria, federation square Southbank and South Wharf, among others.  Melbourne is referred to as the most livable city on in the whole world and so ending a road trip here is a good idea.  The experience will be epic, and the best of memories will definitely be created.