If you’ve ever been interested in women. You’ve probably talked to a few. If you’ve talked to a few you’ve most likely been tested. For the average guy, they don’t even know when they are being tested. Which in general leads to the guy failing to get the girl.

However there are a few guys who gets very consistent results even by not knowing what’s going on.

Figuring out why women test men, how they do it and what to do when they test us, can be very helpful. Not only for men who are looking into getting  some fun consensual intercourse for a night. But also men who are in a relationship ” this is key for you guys especially so Listen Up”.

Women Test us Because They Have To

The shear numbers are insane. But that’s the reality of an attractive woman. This means they have an insane amount of social awareness that we men can’t even phathom. They can pickup on very slight nuances in men that we are not even aware of. It’s a bit intimidating. But this is not something women are conscientiously aware of it, they just feel it. They go by emotions. It’s just a result of the shear amount of approaches guys have tried on them. So they’ve probably met cool guys, bad guys, nerds or even attractive guys who are assholes. What I mean is that they’ve probably been screwed over a few times by douche bags who seemed cool. They’ve learned they shouldn’t judge a book by it’s cover which is a bit of and advantage for us guys. They’ve probably hooked up with a few good looking dudes, but got treated like shit and now value personality as much as looks.  Which allows men who doesn’t look like Brad Pitt to display their awesome personality and attract the girl.

When women test us, it’s basically to screen us. It’s to see how strong a reality a guy has and if he will be the one for her.

She wants to see if you will stick around when shit goes down in her life. This is especially true in ancient times, if a cavewoman gets pregnant and the caveman leaves her, she is basically fucked. She’s not able to find food or defend herself. That’s why she needs to make sure the caveman sticks around after and during the pregnancy.

Does this correlate to today’s women? Obviously not. Women can take care of themselves now. But they have needs as well. They want a man. This is just simple biology at work here. But they don’t don’t want any man. They want THE MAN. So they test you to see if you are him. This is their way to quickly find out if they should be wasting more time on you or not. She’s going to be hit on 10.950 times per year, she doesn’t have time to waste on a chode.

Women think as much about men as we think about women or even more so. They put men on pedestals as they are nervous and also have anxieties. Women are humans.  Women go out to bars to find these great guys and once they recognize one, they will test him and make sure he’s for real, before she lets him take her. 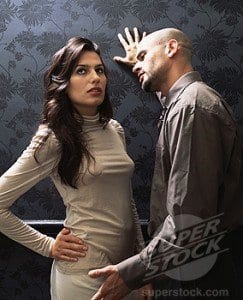 So what are some examples of women testing you?

These are just some examples. You’ll need to read every situation of course.With time spent in the field you’ll be able to recognize tests and deal with them.

So how do you pass tests?

Simply ignore it. Just smile and ignore it. Then engage in another conversation topic. If she does it again — Rinse wash repeat. It’s really that easy. When you ignore a test and display no change in your emotions towards her testing, she will get a little pissed. Because all other chode guys reacts to her. She will start thinking “Who is this guy?” and  you become special. Creating a sense of emotional addiction. But I don’t want to go too deep on this topic today. The mindset you want to have is that you’re awesome. You don’t need to prove anything to this girl. Why even deal with her bullshit testing. Laugh at it.

View it as a little 5 year old kid saying shit about you. Do you really care about explaining why you don’t suck to this kid? Won’t you just laugh it off and continue with what you’re doing i.e. talking and expressing yourself? I would. Women simply test you to see if you’re cool, you pass the test, her attraction for you increases. Rinse wash repeat. Girl’s will test you hard though. Especially the strong willed ones. Some girls only test you 1–3 times. Others will test you 30+ times during an interaction and in a relationship she will test you throughout the relationship, especially every time she feels you are slacking off or when you are not being the man she initially was attracted to. Now that doesn’t mean you should always be on your guard. Cause that just means you’re reactive to her and anything you do comes out reactive rather than from a sense of being centered.

If you have a strong reality and you’re centered. You might not even pay attention to test. You might even not recognize it, because in your mind it’s silly the girl would even test you. You’re so damn cool. You just say shit regardless.

This is the point you want to reach. That will come once you’ve been doing this for a while.

Alex Wise is an editor for Loveawake. He writes his best ideas, advises and tips about relationships, online dating and marriage for blogs and sites.  Follow him on the company site.

Alex Wise is an editor. He writes his best ideas, advises and tips about relationships, online dating and marriage for blogs and sites. View all posts by Alex Wise